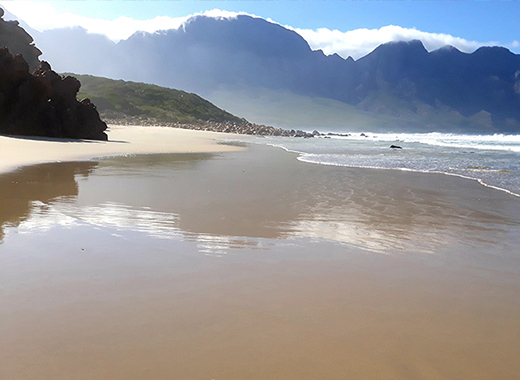 We would highly recommend that our guests combine the best of both areas and spend some time at our Mediterranean guest house on the whale coast route, Betty’s Bay.

This town is situated on the eastern side of False Bay on the award winning scenic whale coastal route R44, ( Clarence Drive ) between Gordon’s Bay and Hermanus.

Being a part of Southern Africa’s first internationally recognized UNESCO Biosphere Nature Reserve (The Kogelberg) the whole area, which boasts some 1600 endemic species, is considered to be the heart of the Cape Floral Kingdom. The Harold Porter National Botanical gardens with indigenous flowers, fynbos covered mountain slopes, waterfalls, streams and dark pools is within minutes walking from Buçaco Sud.

There are superb unspoilt sandy beaches, fresh water lakes, a coastal marine reserve and a colony of endangered African penguins at Stoney Point (one of only three on the African continent).Even though you visit might not be during the whale watching season, which is normally from June to November, there is plenty to do and see by this seaside paridise .The scenic route there ,was voted the number one coastal drive in the World and is always recommendable.

Take N1 towards Cape Town and take exit 47 to Stellenbosch and onwards to Somerset West, Strand, Gordon’s Bay and eventually you find yourself on this spectacular drive to Betty’s Bay.

Alternatively you could take the R 45 towards Franschhoek, drive over the beautiful Franschhoek pass and down the rolling hills to Bettys Bay, past the Theewaterskloof dam, over the hills of Grabouw with all the forests and fruit plantations, where you will join the N2 and later merge onto the R43 in Botriver and eventually the R44 towards Betty’s Bay .

Whilst you are in Betty’s Bay our staff will gladly recommend and make any reservations for all activities, such as whale watching in Hermanus , shark cage diving near Gaansbaai or a zipline canopy tour on the outskirts of Grabouw